Andes Security is a family owned and run business established since 1989. We pride ourselves with a focus on customer satisfaction and the supply and installation of only the highest quality equipment. We Supply install and service All types of Automatic gates, Garage doors and gate motors.

Be it the latest model Italian models or obsolete European or Asian Gate Motors We can repair them or update them with New electronics and remote controls. No job is too big or to small, we can repair or replace anything that moves or is remote controlled. Sliding gate wheels replacements, broken Hinges, electric locks, safety beams, access control, welding, Garage spring replacement. Andes Security is also a specialist in Intercom installation and repairs. We can repair and install all major and obsolete models.

If you are tired of carrying an old brick size remote and want the latest keyring remotes, or want to combine multiple remotes in one. If you need a replacement remote control, contact us. We can supply and code any remote control brand. We are also experts in RIB Italian made Automatic Operators. Our clientele include The City of Botany Bay, Wentworth Hotel, NSW State Rail, Korean Consulate, DHL, Alfa Flight Services, Qantas Caterair and Thousands of satisfied customers spanning all of Sydney. 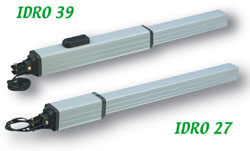 The compact IDRO series of hydraulic actuators is specially designed for the automatic operation of residential swing gates, though is quick and easy to install. The IDRO is specially suited to heavy-duty applications, particularly those requiring constant opening and closing operations, and therefore high-resistant hydraulic pistons. Applied to the gate column, the actuator is able to move gate leaves up to 7 metres in length.

The force exerted by IDRO during operation can be adjusted by means of special valves – so there’s no need to install an electronic panel with an electric clutch. The dimensioning of both internal and external mechanical components has been designed to endure years of intensive, heavy-duty work. In the event of power failure, simply release the actuator with the key supplied, then push the gate manually. 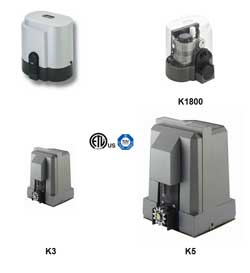 Easy to install, irreversible electromechanical operator for sliding gates weighing up to 500 Kg. Built-in electronic control panel. Mechanical clutch and electrical limit switch for correct operation in total safety. In the event of a power cut your gate will not remain locked because using the customised key provided, you will be able to open it with ease.

K1800 units are a series of operating devices, with KS control boards builded inside, created for automatic movement of sliding doors and gates weighing up to 1800Kg. They are available in various versions, for easy and functional use anywhere from detached homes or apartment blocks to large company premises.

The magnetic ENCODER indicates when the gate comes into contact with an obstacle, and reverses the movement (as required by new European regulations EN12453, EN12445 and by American regulation UL325) without the need to fit edge sensors. The low voltage motor combined with the ENCODER allows slow-down of the gate in approaching to the final positions, giving the movement a still greater sense of safety and fluidity.

PRINCE, with the optional buffer batteries, mean that black-outs will pass totally unnoticed. In fact it is possible to do up to 90 cycles during the black out period. PRINCE can work without batteries too as the Key release provided.

KING units are a series of powerful operating devices created for automatic movement of swing gates and doors weighing up to 500Kg and with a door length of up to 4.5 metres. They are available in various versions, for easy and functional use anywhere from detached homes or apartment blocks to large company premises.

The strength, rust-proof characteristics and protection against atmospheric agents of the enbloc frame are immediately clear. It is within this solid shell that the advanced mechanics are safely enclosed. A group of components designed to operate silently and provide long-term durability.

The electric motors, which are suitable for intensive use, are protected by heat probes. The mechanics, with components lubricated using a special synthetic grease, the large 3-thread endless screw, the double helical impact-proof gear, have been designed to guarantee maximum silence, strength and reliability. It is thanks to these special characteristics that King units can even be fitted on gates of big size.

KING units are powerful and safe, as are all RIB automatic devices, and are designed to comply with all European Safety Regulations. They are equipped with electronic force regulator and, in the PLUS version, with an OPTICAL ENCODER. The ENCODER used in the PLUS models (patented), indicates when the gate comes into contact with an obstacle, and reverses the movement (as required by new European regulations EN12453, EN12445 and by American regulation UL325) without the need to fit edge sensors.

The electro-mechanical reversible actuator Pratic is designed to operate swing gates set on hinge at a considerable distance from the internal edge of the column. Opening radius of gate leaves is 105°. This actuator is reversible; an electric lock should therefore be installed on the gates. In the event of power failure, open the electric lock with the special key, then push the gate manually.

The Pratic features an oil-immersed mechanical clutch that adjusts operating force to the particular weight of the gate leaf. The safety device precludes the need to install an electronic panel with an electric clutch.

RAPID booms come in lengths of between 3 and 5 metres to satisfy the particular needs of the entrance controlled. Columns come in standard orange colour with stoved paint finish or in stainless steel models. All barriers feature built-in flashing light. The RAPID series of electro-mechanical barriers is designed to regulate vehicle access rapidly in intensive applications, such as at the entrance of car parks and residential areas.

In car park applications, automatic barriers operate constantly, day-in, day-out. That’s why the RAPID series is equipped with a ventilated motor, to cope with particularly intensive lifting and lowering of the boom. The limit switch can be adjusted easily to reduce speed in approaching.

Is a new audio kit which includes a new Targha, slim, aluminum, surface mount entry panel, audio module, PSU, C/200 wall mount handset. Cost effective, attractive and all surface mount equipment for ease of installation. The Targha entry panel is 100W x 205H and just 28mm deep surface mounted. The C/200 handset has buttons to operate the lock release, a stair light and aux functions. This kit can be expanded by either adding up to two additional handsets (or more with call boosters) which can be called from the single button, or adding an expansion Targha panel to increase the number of buttons at the entrance.